Jean-Adrien Philippe was granted the Brevet n°1317 in 1845 concerning a keyless winding mechanism, avoiding the need of easily lost keys. He then went on to be the second name behind the Patek-Philippe brand. Other inventors, mostly forgotten, were also active in the 19th century: Charles Lehmann also patented a keyless system in the 1860s, obviously less successful but his system can be found in watches between 1860 and 1890. 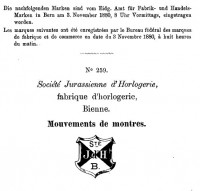 The company of Charles Lehmann

It seems that the Lehmann system was patented in France and in the USA, at least. The US patent has a nice drawing of the complex keyless works. The latest version of the system is quite modern, allowing both winding and time setting with only the crown. Most watches used either a key or a simple keyless system with a pusher to be depressed while setting the time. 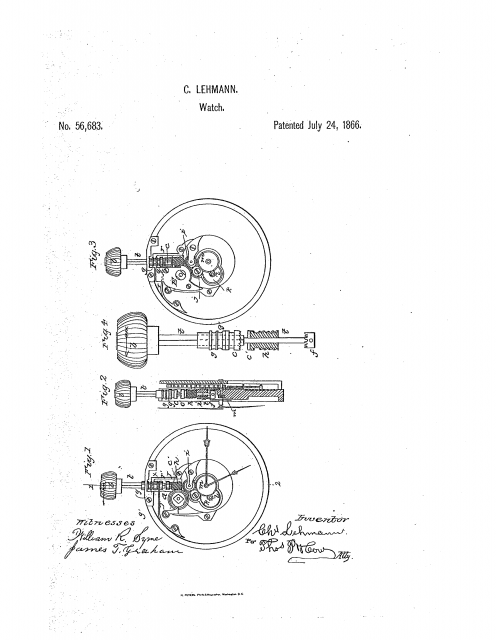 The graphics of Lehmann’s US patent

Most of the system is located behind the dial, and looks quite complex: 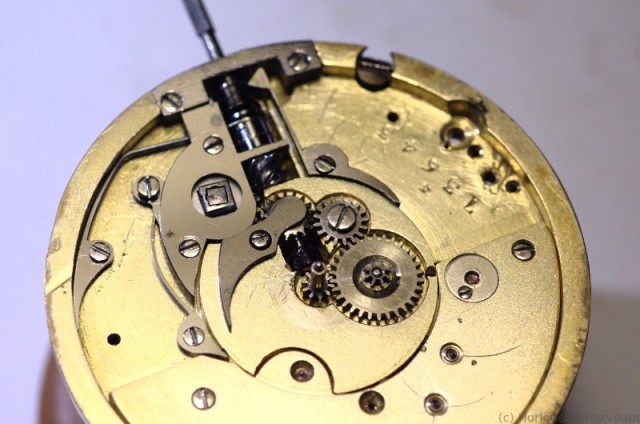 The stem assembly alone is remarkably complex, all those parts must have been very costly to produce.

Close-up of the winding and setting mechanism

The main difference with Philippe’s system is the wormwheel. 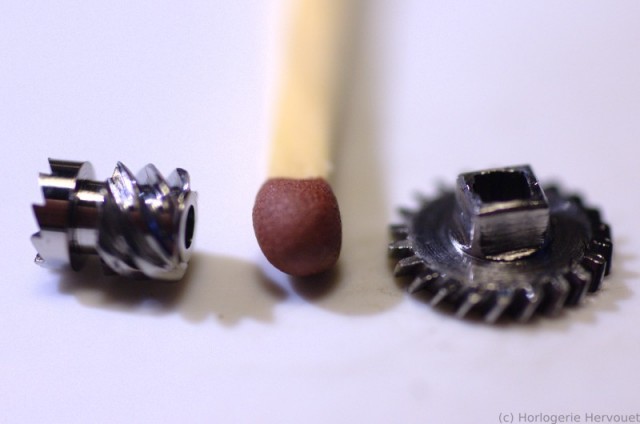 This particular watch had a long life: lots of service marks in the caseback, the engravings on the silver case are almost worn off. Somebody not very talented did some damage: destroyed screws here and there, and the Maltese cross had been violently torn off (it cannot be realistically replaced), the mainspring barrel has to be reshaped. But the most problematic repair is hidden in the keyless works: the small screw fastening the pinion at the end of the stem is loose, the threads have been thoroughly stripped and the hole has been reamed! The pinion being loose, the wear of the gears is important but the system still works…

The clean way to repair this mess is the following: rethread the stem, and drill the pinion so that a slightly bigger screw can pass trough. Of course, the pinion is in tempered steel, so a blowtorch and some quenching afterwards will be involved.

Next, a custom screw is machined:

Reassembling with a custom screw

The patent number is proudly engraved in the baseplate: 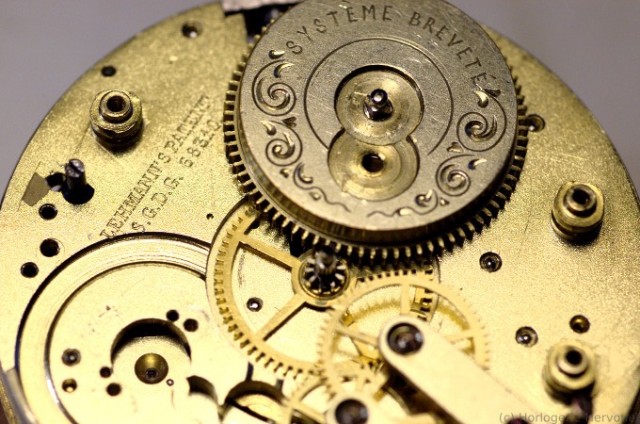 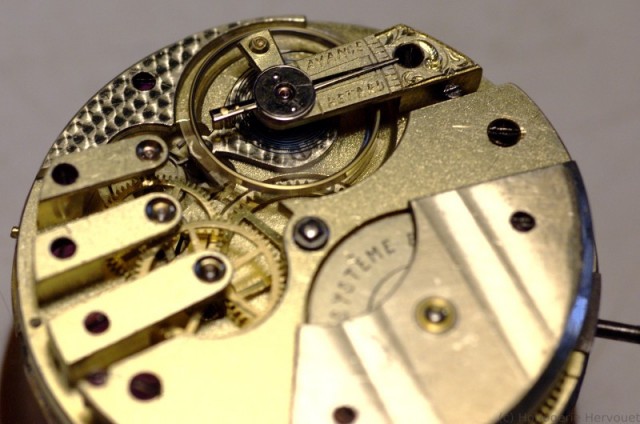 The dial and hands have been replaced at some point, but the silver case is still marked “Lehmann breveté SGDG”.

A classic design, all the originality is hidden inside 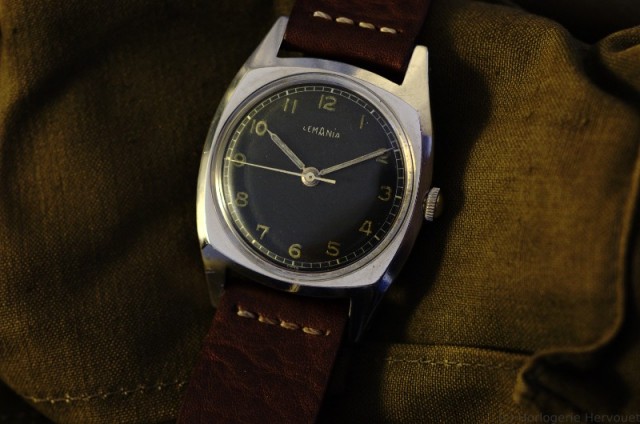 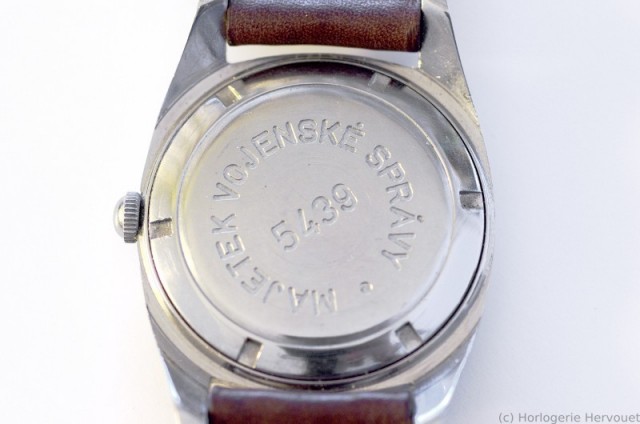 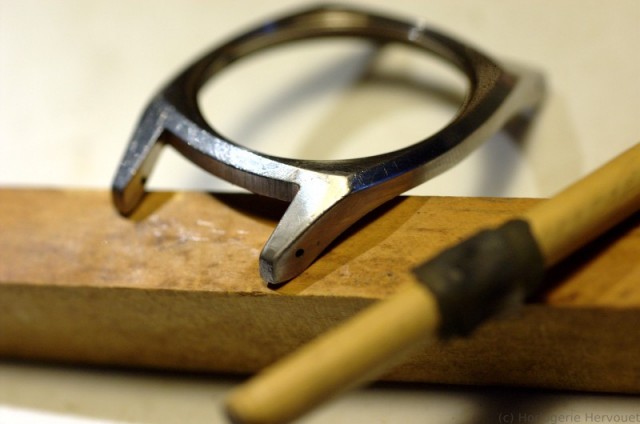 This 1953 Rolex was brought to the workshop as a family heirloom to be serviced. It is a ref. 6084 with the chronometer grade cal. 645 inside, nicknamed “Bubbleback” or “Semi-bubbleback” by the Rolex aficionados (because of the caseback shape). The dial has been refinished at some point, but the paint and varnish are yellowed and look already ancient. It does not have the “Officially Certified Chronometer” marking on the dial, nor the “Super Oyster” crown. But there are marks in the caseback for 6 services, so anything could have happened. 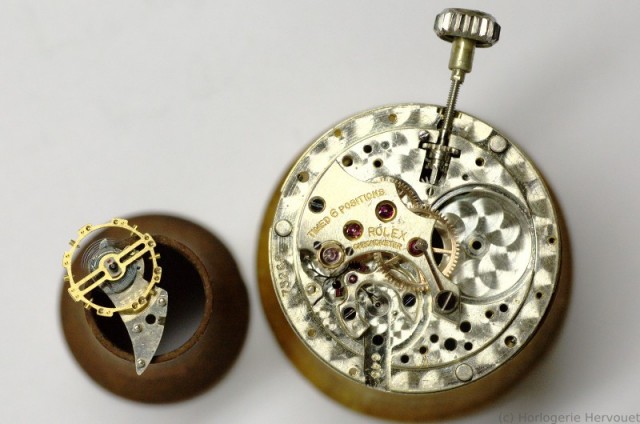 The Rolex cal. 645 is fully decorated; note the specific (and patented) balance

It has been a long time since the last service, as even after the usual cycles in the cleaning machine there was a lot of petrified oil residues in the counter-pivots and chaton of the escape wheel. No wonder the watch stood still. Such chatons are rarely found in modern watches:

On one side of the escape wheel, a removable chaton

The layout of Rolex 645 is common for the 50s, with an indirect second. The friction spring is (as it is usually the case) a bit tricky to get in position. 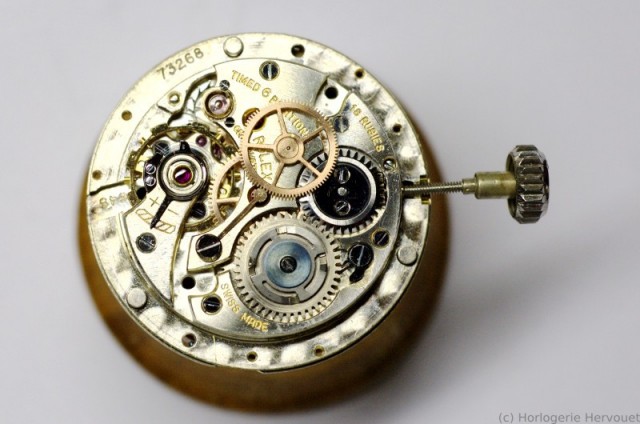 The Rolex 645, without the automatic winding parts

On the dial side, one can see and admire the setting spring, nicely angled and very frail. Also, the antishock device counter-pivots are different : dial side, inserted in a plate; bridge side, it is removed by gently turning like the Kif device.

The winding device is unidirectional and use a rotor, allowing the oscillating weight to turn 360°; a modern feature at a time when most other automatic movements used “bumper” devices with partial rotation and less optimal winding. It is modular, the base caliber needs no modification other than adding some coupling parts over the mainspring ratchet wheel. It also have its specific jewel count (2) engraved on the cover. 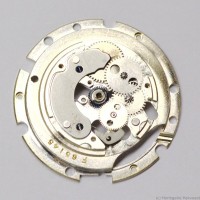 The inside of the automatic winding module 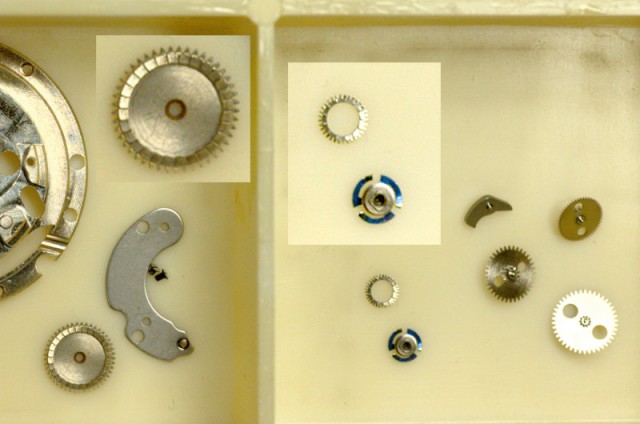 The Breguet teeth (ratcheting) of the coupling wheels 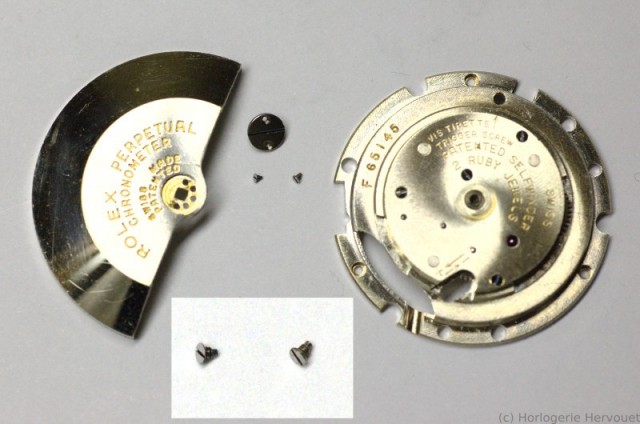 The rotor screw is itself secured by two small screws; the right one, missing, had to be remade 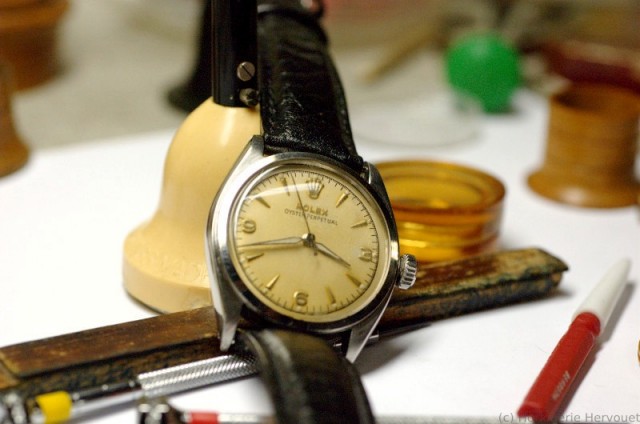 Sitting on the bench 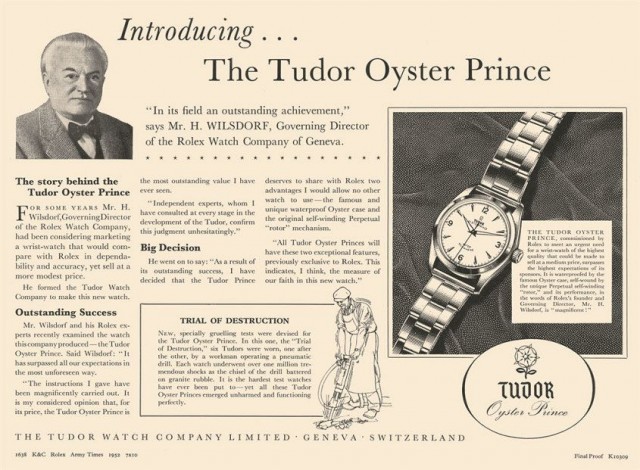 Tudor was intended as an entry-level brand for the less democratic Rolex. “Montres Tudor SA has designed, manufactured and marketed Tudor watches since 6 March 1946. Rolex founder Hans Wildorf conceived of the Tudor Watch Company to create a product for authorized Rolex dealers to sell that offered the reliability and dependability of a Rolex, but at a lower price.” says their website. So, beginning in the 1950s, they outsourced their movements to ETA, a big producer of various movements and ebauches, and put them in Rolex “Oyster” cases, with Rolex-signed bracelets. 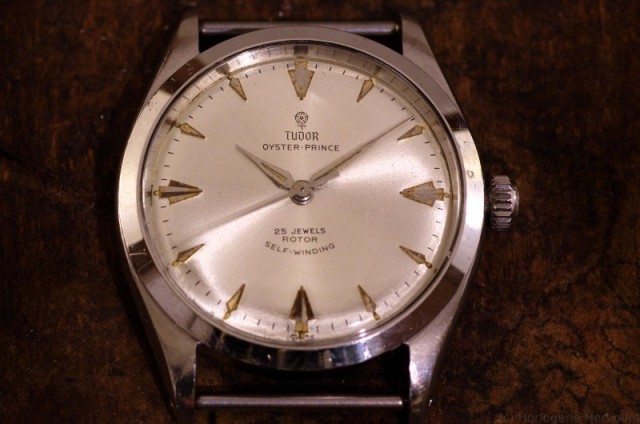 The dial boasts the main feature, the automatic winding

Watches are carefully branded and marketed, and words do count. Successful brands like Rolex and Omega did put some thought into their keywords and most importantly, they stuck to them for decades until they became part of the modern world, like the Levi’s jeans and the Coke soda. What are the main concepts in the Rolex/Tudor language?

Of course, one can play with words and name “Oyster Royal” a Rolex watch and “Oyster-Prince” a Tudor one…

Why 7965? This is the reference number of the case, often engraved between the lugs; Rolex SA made quite a few of them over the years, it must be known to clearly identify the watch. 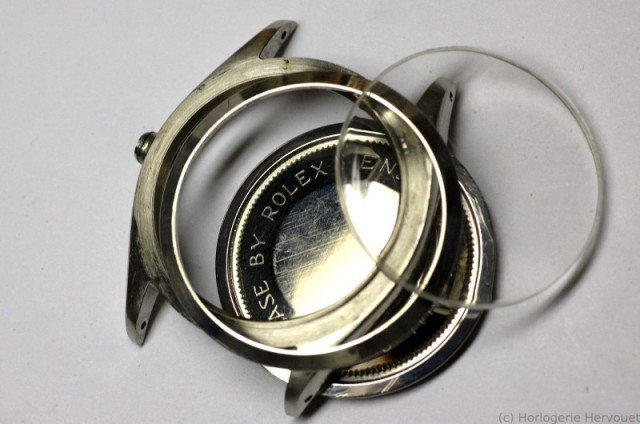 Bezel, glass, midcase and back disassembled before cleaning

Tudor watches from the 1950s and 1960s clearly state the provenance of their Oyster cases: the Rolex logo is on both the caseback and the crown. The production date is stamped inside the case (IV 59 here). 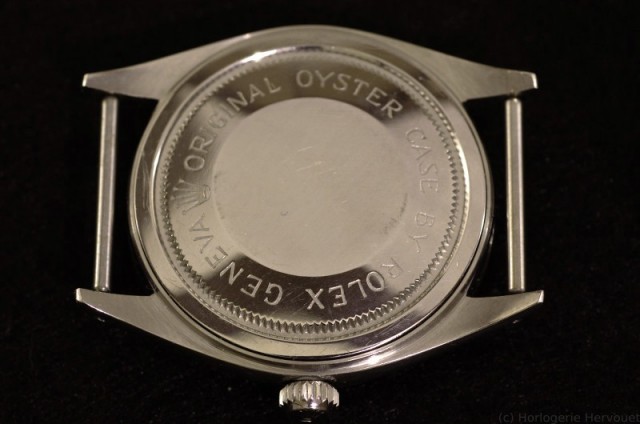 The caseback proudly displays its heritage

Inside, the ETA movement is nicely plated and decorated. In this particular watch this is an ETA 2461, a real workhorse, tough and accurate when well regulated. It may have been replaced: the originals have a balance wheel with screws and are often plated white, this one has a more modern annular balance and is nicely gold/orange plated. 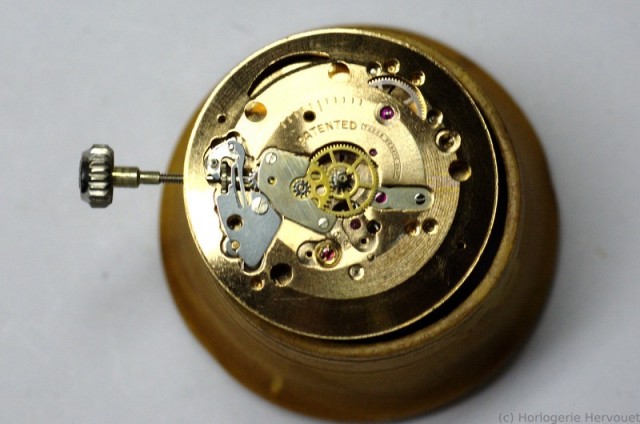 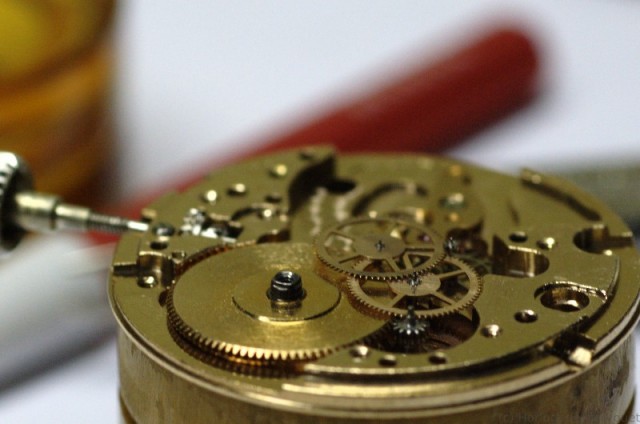 A forerunner of the now ubiquitous ETA2824-2 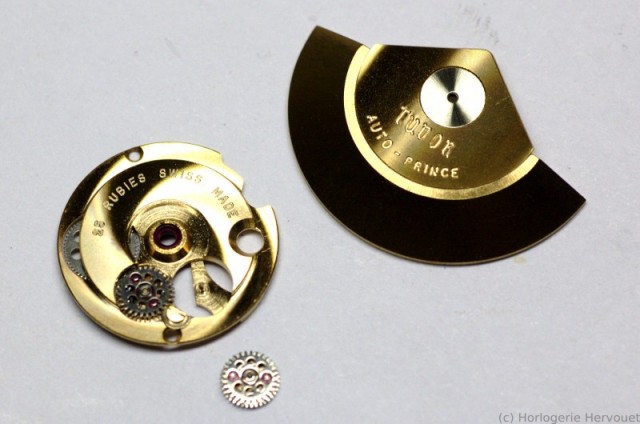 The rotor has the special gothic Tudor Auto-Prince markings

On this gold Longines, a strange problem occurred: the pivot of the minute wheel just … broke. Here is it pictured, after is was replaced and set in the main plate : 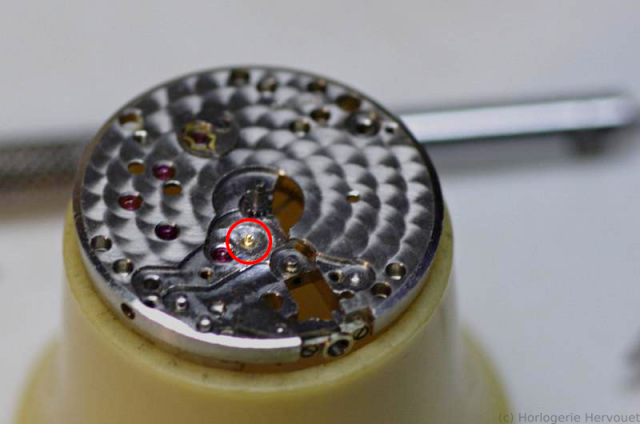 The 8mm Lorch lathe was quite useful: it has a range of pivot drills, allowing to quickly turn small diameters. 0.52mm (baseplate) and 0.35mm (minute wheel) were needed.

The Lorch at work

It was then finished by hand using a pivot file and a burnisher to the exact diameter and length. Lastly, it was precisely set in the baseplate so that the minute wheel do not touch it (but also do not touch the hour wheel): the tolerance is not bigger than 0.01mm. One would have thought the worst was over, but the hairspring needed some work too. A previous “watchmaker” trying to repair this watch damaged it with ham-fisted hands.

This hairspring was bent…

It was bent: not flat anymore, it touched the arms of the balance wheel. Also, the terminal curve was completely off, obviously. With a light touch and #5 Dumont tweezer, all is good again and from there, it is business as usual.

But the folks at the Longines plant made a last nasty surprise: the cap jewels for the Incabloc shockproof system are white. Easy to lose!

It feels nice to see this one ticking, and even nicer to see it leave the workshop… reminds me too vividly of a tricky repair. 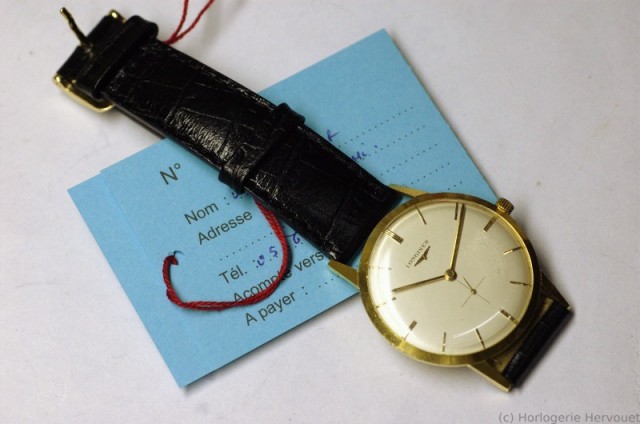 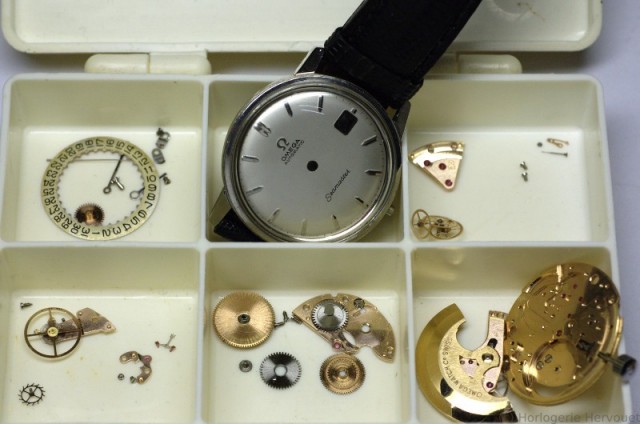 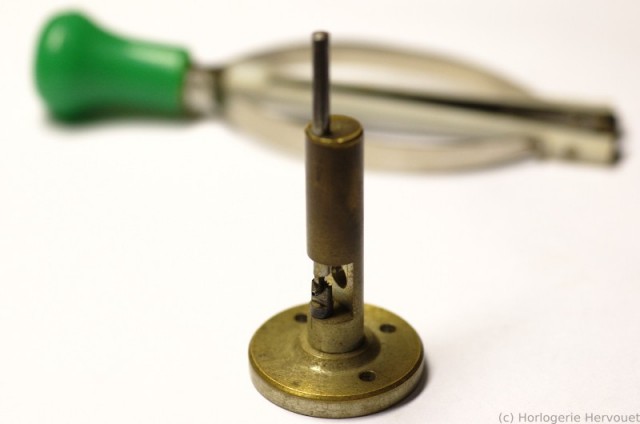 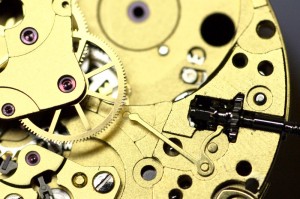 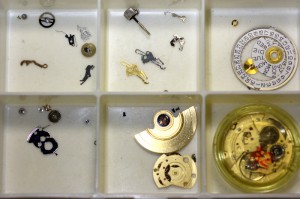 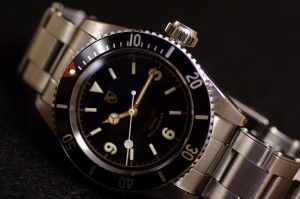