A typical watch of the 80s, an all steel diver with screwdown crown. Its movement is a caliber made by France Ebauches at the beginning of the 1980s. Seldom seen anymore, because of a short production life, it has an interesting specification, the high torque of its motor. It will work even if there is a little dirt of dried grease inside. The downside is the battery consumption. A modern quartz will eat up less batteries, but will need a lot more servicing in the long run.

Made at the same time as the FE 4611, there are some common parts under the dial:

This one was made in August 1981 (see the date stamp on the plastic hood). It needed a full service (complete disassembly, cleaning, lubrication) to work according to specifications, the wheel train was running completely dry. It was never opened before, the red seal had to be broken for the occasion. 34 years without service, not too bad.

In the case… note the red seal (now broken)

In conclusion, this is an interesting watch with a nice movement, uncommon, very tough, the same was mounted on the well sought-after Yema Superman; it also does offer a pleasing alternative to the ubiquitous Rolex design: 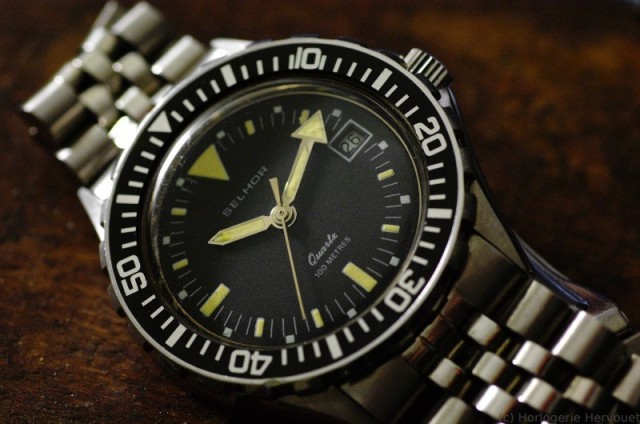 Selhor was a small french brand, active for many years. Nothing was made in-house, they only assembled cases and movements with custom dials. An error was made here: the depth rating of the case is 200m, but on the dial it states only 100m!